Ever since I started knitting, I’ve been a little disappointed in the pictures  I take of my work. I spend a lot of time creating my pieces, only to badly photograph them with my iPhone on backgrounds with poor contrast. My photos really don’t do the knitting justice.

I’m currently taking a digital photography class, where I’m learning to use my husband’s Canon DSLR. Knowing some camera basics will definitely make a difference, but one thing I’ve learned in my class is that the composition of the photograph really matters. It’s important to make sure there is adequate contrast between the background surface and the object of interest. Plus, (main rule of photography) it’s all about the lighting!

When I was thinking about how to take better project photos, I got inspired by this great tutorial by Flax & Twine (thanks for the inspiration!). I decided it was time to create my own light box to serve as a nice backdrop for photographing my knitting projects. I basically followed the tutorial, with a couple additions to make the box more stable.

First, I gathered my supplies. (As soon as I got started I realized duct tape was not the right tool for the job, and replaced it with scotch tape.)

Next, I chopped off the flaps with my utility knife. 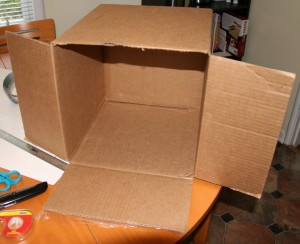 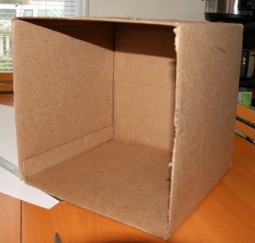 Then I drew some lines on the sides to mark the pieces I was going to remove. I wanted to make cutouts on three sides – top, left, and right. My box was 12″x12″x12″, and I made the lines 1″ from each side.

After cutting out the first of the squares, I was a bit worried about the edges staying strong enough, so I cut up some little triangles of cardboard (3/4″ on a side) to make a support on each weak edge. I hot glued eight of them onto each edge.

Here’s what the box looked like with all three sides cut out: 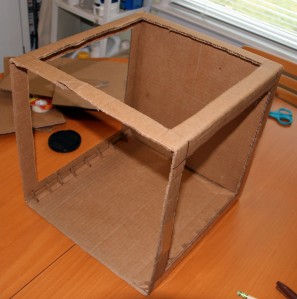 Next, I cut white tissue paper to cover the open sides. I used two layers to start out with. It’s easy to add or remove layers to get the right amount of light into the box. 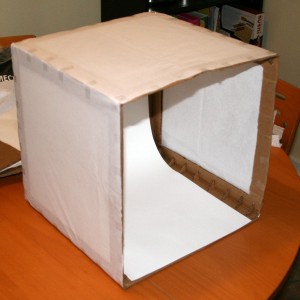 At this point, I thought I was done, but I realized there was still a serious structural stability issue. The unsupported strips of cardboard around the front opening were very flexible, and I worried that the box wouldn’t be strong enough. So I decided to shore it up with extra strips of cardboard to prevent them from bending. (Engineering note:  I made sure to cut and orient the stabilizing strips in the direction that would best resist bending.) 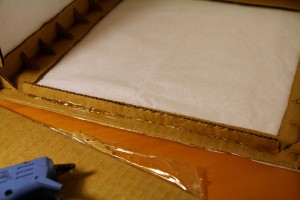 With all the construction finally complete, I had to try it out! I set up a few lamps to illuminate the box. Clearly the room was too dark for good photos, but I got a few decent ones inside the box. 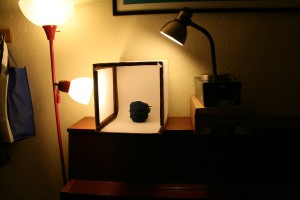 This is some great yarn I bought from Brooklyn Tweed (and used to make the cowl featured in my blog header).

And my trusty scissors: