Although I haven’t been very good about posting this month, I have made some significant progress on my stash challenge! I’m deep in the serious part of writing my dissertation, so it’s been wonderful to spend time knitting in the evenings to relax and rest my mind. This month I completed three projects and put a dent in a fourth larger project. I used up 300 g of yarn on these projects, or 6% of the starting total (5000 g) – not too bad for one month! Now I’m on a pace to finish my stash challenge in about a year and a half, which is far more respectable than last month. So, what did I make in March?

First, I made a multicolored farmer’s market bag from the Hexagonal Market Bag pattern. I used Lily Sugar’n Cream yarn, a nice multipurpose cotton yarn. The bag took 60 g of yellow and 90 g of blue/yellow/white. I modified the pattern ever so slightly in the last step:  instead of using a three-needle bind-off to join the strap to the rim of the bag, I used grafting for ribbing. This technique is pretty similar to standard grafting with kitchener stitch, but instead of working all the stitches in order, you separate the knit and purl stitches onto two needles, work all the knit stitches, turn, and work all the remaining stitches, which now look like knit stitches. I really prefer the look of the grafted join, since it looks identical to the opposite end of the strap. The bag became a gift for my mom. 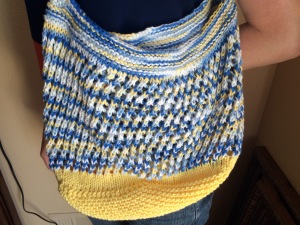 Next, I got to work on using up some of the Malabrigo merino worsted I have left from numerous other projects. I made the Bloom Couture Headband by Melissa Monday with some green Malabrigo. It only took 15 g to make the whole headband, so I’m thinking this is a great way to use up little bits. Plus the awesome colorways that the Malabrigo comes in mean the headbands really add a pop of color!

I also made some more progress on the heart baby blanket I showed last month. I used 115 g of Red Heart Classic Soft yarn in orange, finishing off my current ball. Right now the blanket is about 56% finished, so hopefully I’ll have it done by the end of next month.

In progress and getting bigger!

Finally, I decided I was tired of knitting other people’s designs and it was time to design my own headband. I came up with this plaited headband design, which I’ll write a full pattern post for in the near future (I’m still working out some of the details to make it clear and complete). This headband used 20 g of purple Malabrigo merino worsted. I’m really proud of the way it turned out, and I can’t wait to make more headbands and share the pattern with you all!

Today’s post features two accessories I made for my husband. The first one is an example of my bad habit of taking a long time to finish a project. In this case, I did all the knitting for the mittens pretty quickly, but didn’t quite have time to purchase and sew on buttons before Christmas, so I gave them to him with the promise “you can pick the buttons!” That turned into months and months of waiting, until we bought two different types of buttons 11 months later. So then he got them for Christmas that year…not! Since there were two choices for the buttons, neither of us could decide which ones to use. It took another ENTIRE year until I finally sewed on the dang buttons, which took all of 20 minutes. So two years later, he actually got to wear his mittens in December 2014. That is epic procrastination, and I’m not proud of it.

Fortunately, the hat was finished much more quickly. I started it in December 2014 and finished it just a couple weeks later in January. This is probably more a function of hats being easier for me to finish than other items, but I’m hopeful that I’m turning the corner on finishing what I start.

The yarn I chose for these two items is Debbie Bliss Donegal Luxury Tweed Aran, a wool/angora blend, in a soft blue with bits of white and brown. One ball can easily make a hat, while it took about one and a half balls for the mittens. Both of the patterns come from the Interweave Knits Accessories 2011 magazine, which I’ve mentioned before.

The Juris Mittens, by Alexis Winslow, combine fingerless gloves with a mitten flap in a classic tweed. They are constructed from the cuff up, knitting the fingerless gloves first. Then the mitten flap is made by picking up stitches along the back of the hand, then knitting in the round. The gauge is fairly tight to keep the hands nicely insulated. These mittens were my first project involving individual fingers, and I was pleased that it wasn’t much harder than making a thumb, it just took more time to make them all. I followed the pattern pretty much exactly, and I really liked the results.

I took a bit more liberty with the Thoreau Hat, by Terri Kruse. This hat begins with twisted 1×1 ribbing, then moves into stockinette with a single detail panel consisting of ribbing and a 3-stitch mock cable. I liked the overall look of the hat, but as I soon as I started working the 3-stitch mock cable, I realized I would prefer to do a real cable. So I made one up – I had never seen a 3-stitch cable before. My method was the following:  sl2 to cable needle and hold in front, K1, sl2 back to left needle from cable needle, sl1 to cable needle and hold in front, K1, K1 from cable needle. This basically resulted in knitting the 3 stitches in reverse order from left to right.

Together, these two accessories are perfect to keep my husband warm throughout the winter. Although the hat wasn’t quite finished in time, he was able to wear the mittens during our trip to London and Paris in December. The combo gloves/mittens were just right to keep his hands warm while taking lots of photos of the cities! 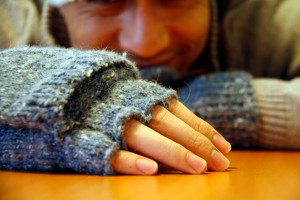