My goal for May was to knit up at least 300 g of yarn. I ended up only using 220 g, but 35 g of that was lace yarn, so I actually made quite a lot of stitches! I completed four distinct projects this month – no multiples of one item this time.

First, I made one more Plait Headband using 30 g of pink Malabrigo worsted merino. This was the wide version, which is designed to cover the ears for cold weather. I made it a little shorter than the other wide headbands I made last month, simply because I ran out of yarn. 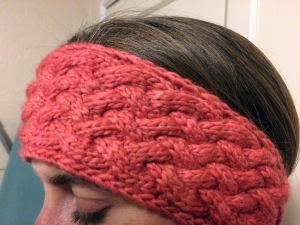 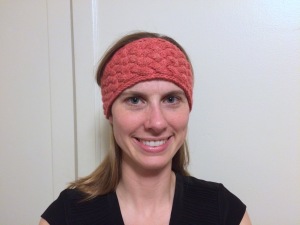 The next project used up another colorway of Malabrigo worsted, dark blue. I made a Foliage Hat by Emilee Mooney, of which I had made a couple a few years ago and really enjoyed. This one turned out quite a bit bigger than the other two. I’m not sure what happened, since I used the same yarn and needles – maybe my knitting has gotten looser? Anyway, it’s still a reasonable size for my head and would also fit someone with a larger head. 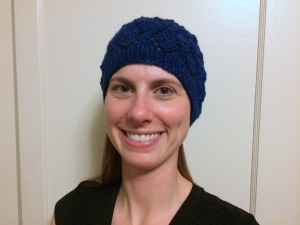 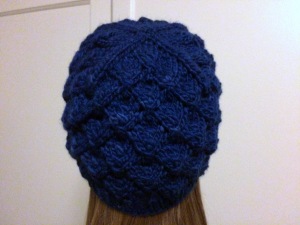 Project #3 used yet more worsted Malabrigo, this time the Rios line in a purple and green multi colorway. A cowl is a great way to use up a whole skein of Malabrigo, and for this project I chose the Very Braidy Cowl by Maryse Roudier. It was a pretty quick knit with cool 16-stitch cables. A slight word of caution:  I misread the pattern while I was working the first few repeats, putting a few too many rows between the cable rows. pattern said to “repeat rows 5-24“, which I misread as “repeat rows 1-24“. I think the pattern would be more clear if it just said to repeat rows 1-20 instead. Anyway, it didn’t make too much difference to the final product. 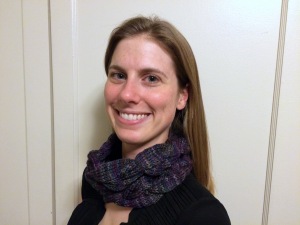 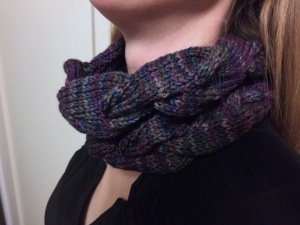 Finally, I spent most of the month working on the Good Day Sunshine Shawlette by Amanda Bjørge, using 35 g of red Lorna’s Laces Helen’s Lace (also used for my wedding shawl). This was a fun project because I learned some Estonian gathered stitches, including “3 into 3”, which means k3tog, keep stitches on L needle, yo, k3tog the same 3 stitches again. These kind of stitches make a thick, cozy fabric, which is a nice change of pace in a lace piece. I also tried cable stitches without a cable needle, and it worked really well on the little 2-stitch cables for this pattern. I’m eager to try it on larger cables. Unfortunately, the shawl ended up way smaller than I expected and did not use up all the remaining yarn…turns out it’s important to check your gauge! I used the recommended needle and I guess my knitting is tighter than the designer’s. I’m still happy with the result, as it’s a small size that just adds a bit of color without getting in the way. Is it just me, or does the combination of the shape and color remind you of a phoenix? 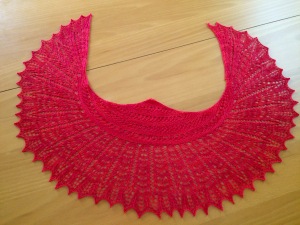 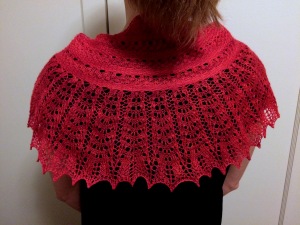 Almost 20% done! That’s an average of about 250 g per month since February – not as much as I had hoped for, but not too shabby. At this rate I will finish in September 2016…