Today’s post is a set of pillow covers I made for two brown pillows that used to live on our old futon, but clash rather hideously with the black couch we have now – meaning that they have been hiding out in a closet for a while.

When I was shopping for fabric for my apron, I found some super cute Paris-themed fabric, and had to buy it. (I have studied French since 7th grade and finally had the opportunity to go to Paris last December, so this is definitely in character for me.) I wasn’t sure I wanted to use it for clothing, but realized this would be the perfect way to dress up the couch and breathe new life into the forgotten pillows.

To make the pillow covers, I used the instructions for project 5 in Sewing Machine Basics, by Jane Bolsover. This is an incredible book packed with great information on all kinds of machine sewing techniques. I’ll definitely have to write a whole post about it and its companion, Sewing School Basics, once I’ve had a chance to try a few more projects from them. So far I can enthusiastically recommend them!

The supplies I used for this project included about 2 yd of main fabric, 1 yd of contrast fabric, 6 yd of cotton piping cord, two 14″ zippers, and matching thread. I used the general purpose foot, the overcasting foot, and the zipper foot on my sewing machine.

The first step was to measure the pillows to identify how much fabric was necessary. I found that my pillows were 16″ per edge (square), but I actually needed 18″ of fabric (plus 5/8″ seam allowances) to account for the pillow thickness. I made pattern pieces out of old tissue paper, ending up with a 19-1/4″ x 19-1/4″ square for the front and a 19-1/4″ x 10-1/4″ rectangle to make two back pieces connected by a zipper. With these lovely homemade patterns I cut out enough fabric for both pillows.

I installed the zippers into the back pieces using the centered zipper method. I machine basted the two back pieces together to make a seam along the center back, then pressed the seams open.

I neatened the raw edges of this seam using my overcasting foot and a zigzag stitch. With the overcasting foot, you place the raw edge right up against the little guide of the foot so that the zigzag stitch captures the edge. This is a technique that I learned from Sewing Machine Basics, and I’m a little sad I didn’t know about it when I was making earlier projects. It prevents the raw edges from fraying and adds a professional touch. It definitely adds time to a project, but in my opinion it is so worth it.

Now it was time to make the red piping, which was the most time-consuming part of this project. The basic idea of making piping is encasing cotton piping cord in the fabric of your choice. I used 3/8″ piping cord for the pillow covers, which I believe is the same as size #5. The fabric strips used for the piping were cut on the bias (like bias tape), which means at 45 degrees to the main selvage of the fabric. Based on the piping cord diameter and desired seam allowances of 5/8″, each strip was 2.5″ wide. I found it helpful to draw the lines using chalk pencil before cutting – otherwise I’m sure it would have been impossible to stay at 45 degrees. 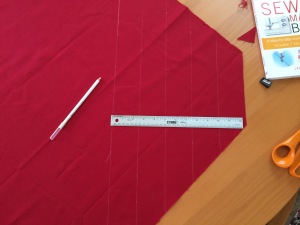 To make one long, continuous strip, I sewed strips end to end along the diagonal ends with 3/8″ seams. Then I pressed the seams and trimmed the corners that extended over the edges. This step took a little trial and error to get the alignment correct, but turned out pretty well. 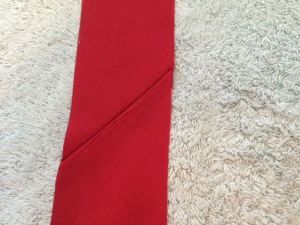 To assemble the piping, I placed the piping cord inside the long bias strip with the right side out and used the zipper foot to sew as close as possible to the piping cord. This part was really tedious because I had to keep stopping to adjust the cord and make sure the raw edges were staying aligned. Does anyone have any tips to make this easier? I ended up with about 12 ft of piping in this lovely red accent color, ready to attach to the pillow covers.

I temporarily attached the piping to the right side of the front piece by lining up all the raw edges and basting the piping into place. To help the piping turn the corners, I cut out notches in the seam allowances at each corner. I made sure the place where the piping joined was at the bottom.

To finish assembling the pillow cover, I put the back piece on top of the front piece + piping with right sides facing (making sure to open the zipper first!), basted all the pieces together, and seamed all the way around as close as possible to the piping. Then I painstakingly removed all the basting and neatened the edges all together with the overcasting foot. 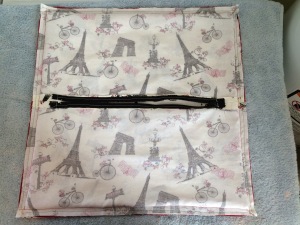 All pieces basted together

After seaming, removing basting, and neatening

To make the seams less bulky at the corners, I trimmed each corner at 45 degrees right next to the seams and neatened those edges too. Then I turned the pillow covers right side out and marveled at how well they turned out!

Finally, I stuffed the old brown pillows into the new covers and dressed up my couch with my awesome new pillows. 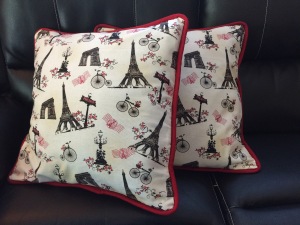 In total, it took me about nine hours to make these pillow covers, and about half of that was making the piping. I definitely think the piping was worth doing though; it adds  a nice contrast and makes the result look much more professional. I’m excited to have a slightly classier looking couch, pleased that I breathed new life into pillows that weren’t being used for anything, and enjoying the daily reminder of the wonderful memories of my trip to Paris.